Recently some old foe of mine, binge eating disorder, returned without warning. I was baffled. How did this happen? I battled severe eating disorders when I was younger but I kept it pretty much under control for the past 10 years. I was hoping that things surrounding food and weight would get even easier as I cruised into midlife, but I was wrong, binge eating disorder came back with a vengeance.

Female Purgatory
Midlife and peri-menopause (aka female purgatory) sneaked up on me. I was not prepared for the ferocity of the infamous hot flashes let alone all the other fun symptoms:  Sleep problems, night sweats, mood symptoms, concentration and memory problems, difficulty to exercise or keep weight under control, change in menstrual patterns, and a redistribution of body fat around the middle. To top this my friends, who have entered purgatory a little ahead of me, assured me that I still have a lot to look forward to such as decreased sexual interest, becoming best friends with lubricant, and muscle mass that disappear overnight. Oh man. 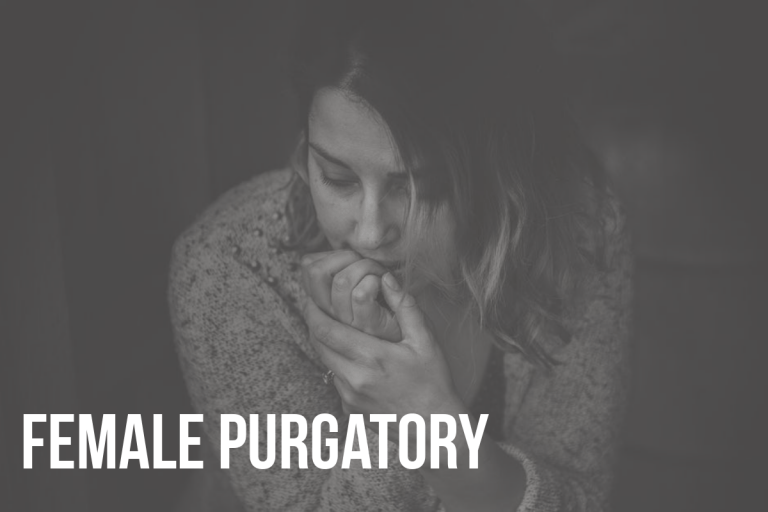 I Fell Down
As predicted, muscle deterioration came knocking at my door only a few weeks ago. I was squatting down in a store to admire something on a bottom shelf (as I have done a thousand times before), and when I tried to get up, I simply couldn’t. Instead, I toppled over into the aisle, to the horror of my kids. Luckily there is also something empowering and positive that happens to us during the middle years: An attitude of “I don’t care a hoot what people think anymore, whether I’m laying on the ground in Target or wearing sweatpants and no make-up to a party.” In fact, people should not mess with a woman in purgatory if they value their lives.

Denial Followed Close Behind
This all started up again about a year ago. I found myself consumed with thoughts of food, diets, and weight control, and worst of all, I could not stop binging. This, of course, meant I did not fit into my clothes and I felt like a total failure. For crying out loud, I wrote a book on this stuff, surely I could figure it out.  So, I initially hid behind piles of denial and believed that I simply had to do better: Eat less (much, much less), exercise more (much, much more), make elaborate food and exercise plans, restrict food, and isolate myself until I look and feel better. It sounded exactly like a phrase from my journal years ago when I was in the midst of an eating disorder. What was going on? After more months than I care to admit, I couldn’t fool myself any longer, I knew I needed help. I stopped the diets, told my family and my doctor that I fell of the wagon, and started the process of getting the help I needed.

What Does The Research Say?
When I started researching the link between eating disorders and midlife I found that I was not alone. In her excellent book “Midlife Eating Disorders” Dr. Cynthia Bulik talks about the scores of clients she worked with that had an eating disorder flare up again (or for the first time) during midlife. According to her research binge eating disorder had been the most prevalent disorder, but she also reported cases of people who battled anorexia and bulimia.  Interestingly, the most likely group to develop binge eating disorder was women in their mid-years. The average age in the US for peri-menopause is 50 and last approximately 4 years, however for some people it can last anywhere from one to ten years.

Don't Throw Away The Men

Dr. Cynthia also referred to men who battle with eating disorders in midlife. She calls this life stage “Manopause”, which is a time around 50 when men indeed go through some changes: Weight shifts to the midsection and love handles becomes a thing. Also, hair thins, or disappears, or migrate to parts of the body where it never used to grow. They also have to work harder to stay in shape,  they also get injured, and their sex drive also decreases. The urge to recapture youth and become more muscular or leaner propel many men into eating disorders, with binge eating disorder in the lead.

Here are Some Key Reasons Why Eating Disorders Show Up in Midlife:

What Can Be Done?

We have Therapy Groups, including a group for people with eating disorders and food addiction, at Life Solutions Counseling in Beaverton OR. We also plan to do ONLINE groups in 2019, so let us know if you are interested. Our groups are real, inviting, and supportive and facilitated by a qualified mental health professional with years of group experience. Joining a group can be scary and awkward at first, but don’t let that keep you from the benefits of support, accountability, and friendship. Please call Heleen at (503) 914-2749 if you have any questions. Click here to learn more about our Therapy Groups

HOLIDAY SPECIAL TO HELP COUPLES
Heleen Woest is a caring and skilled therapist who loves to help couples with relationship and parenting issues. She offers a safe space where couples can deepen trust, repair wounds, and communicate needs and wants to each other. **OFFER: 8 sessions of 90 minutes each for the low price of $80 per session (normally $160). Offer valid till December 31st, 2018. Call Heleen at (503) 914-2749 or CLICK HERE TO GET 50% DISCOUNT ON COUPLES COUNSELING

HOLIDAY SPECIAL TO HELP FAMILIES
Some families experience pain, chaos, and violence during the Holidays. Heleen knows about the many challenges and conflict that families face and she loves to help parents, children, and extended family members restore unity and peace.**8 sessions of 90 minutes each for the low price of $100 per session (normally $200).Offer valid till December 31st, 2018. Call Heleen at (503) 914-2749 or CLICK HERE TO GET 50% ON COUPLES COUNSELING